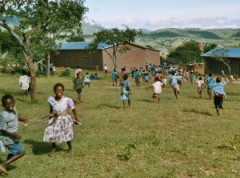 Chancen durch Bildung e.V. („Opportunities through Education“) is a German NGO, based in Munich. Founded in 1988, we have built or assisted in building more than 20 schools, supported dozens of students with scholarships, and the training of assistant teachers, besides other projects.

In December we received the financial approval of our newest project, a new Teacher Training Center in Mzambazi, Northern Malawi. Based on some existing buildings close to the Mzambazi Health Center, we will construct a new central building and two hostels, as well as supporting facilities, which will allow us the first intake of 125 students in September. Together with our partners in this projects from the Diocese of Mzuzu, this appears to be a quite ambitiuous goal, but we are optimistic!
Up to 42 students will have the opportunity to have a 2/3 scholarship, aiming at students from families from the countryside, from families without other professional income. This should improve income stratification, strengthen the ties between teacher and their original school, and lead to a higher resilience of families and communities against bad harvests due to climate change.

In August 2014, a training for Volunteer Teachers has been implemented. As the lack of skilled teachers has been increasing since the beginning of the new millenium, leading to a pupil – teacher ratio of 1:80 and even worse in rural areas, communities start to hire Assistant Teachers i.e. untrained young people who have completed secondary education.
To allow these young people a better approach to their pupils, our training initially aimed at the provision of basic skills for this work. In the first courses, more than 100 young women and men participated. In between more than 200 students participate. About one third of them will sit exams in September 2017, and will thereafter be fully trained teachers. Moreover, a second group has started the full two-year track in August 2016. Since our students have accepted to stay at their schools for at least five years, this helps the most needy regions in the country.

Expansion of Kasuluwa School to a Full Primary School

Kasuluwa is a community very far from the next city, and was without its own school in the village. During the rainy season existing schools in the area could often not be reached by the learners. So a primary school was needed which was finished in early 2015. Other buildings have extended existing schools in Mawende, which has four class rooms now, and in Mzgola, with seven class rooms now. In Nambo a new classroom block was inaugurated in October 2015, providing the school with a fifth and sixth classroom, and the last one to complete the school in 2018.
All of these schools will continually supported until they possess an adequate capacity for the education required in the area.

Construction Projects in recent years
– Some weeks ago we were asked whether we would be able to support the establishment of a new Health Centre in Mzimba South. Having the Corona Crisis in mind, we decided to use the limited costs, and took over a midwife and a clinician house. They are supposed to open soon, in August 2020.
– Mawende: The community has been supported in the construction of four classrooms, and two more were already in progress in October, during our visit. Currently we plan to support the School with two teachers‘ houses. Since the cost estimates have reached us at the end of June, we are able to build the houses until the end of the june 2020.
– Kasuluwa was the first school in the recent years that had been built within one calendar year. It was extended with grades 5 to 6 recently, and we will support the school with the next school block this year, and also some material to allow the community to build a kitchen and a store room for the harvest of the school garden..
– Nambo: Nambo is a bigger school in the suburbs of Mzuzu. Last year the third school block could be taken into service, but the two biggest classes with up to 150 students still have lessons under a tree, or in a nearby church. With the help of Munich based Christian Liebig-Foundation, the last missing school block was built in 2017/18.
– Lukalazi: This cooperation with the Lukalazi Development Foundation has supported by the contribution of a head teacher’s house. The project has been started in 2017, the school is in service since September 2016, as a Junior Primary School with four classes. Currenly the rectors’s house is being built. Since 2018 the school has been extended to a Full Primary School, with water supply, kitchen and a library. It is one of the first schools ready for inclusion of disabled children.

Jour Fixe and Annual Meeting
Our Jour Fixe is at the second Tuesday of the month, mostly in the „Weltwirtschaft“, Eine Welt-Haus, Schwanthaler Str. 80, close to the Underground stop „Theresienwiese“. Start time is 19:30.

Dontations
To continue our construction works and Food Programs at the mentioned schools and others, your donation and support would help us a lot – to give children in Malawi a solid school education and a better future!

For each donation CHANCEN DURCH BILDUNG e.V. declares the obligation, to use it effectively and responsibly in our projects.

Do you want to support
our work?
> become a member!

Any cookies that may not be particularly necessary for the website to function and is used specifically to collect user personal data via analytics, ads, other embedded contents are termed as non-necessary cookies. It is mandatory to procure user consent prior to running these cookies on your website.